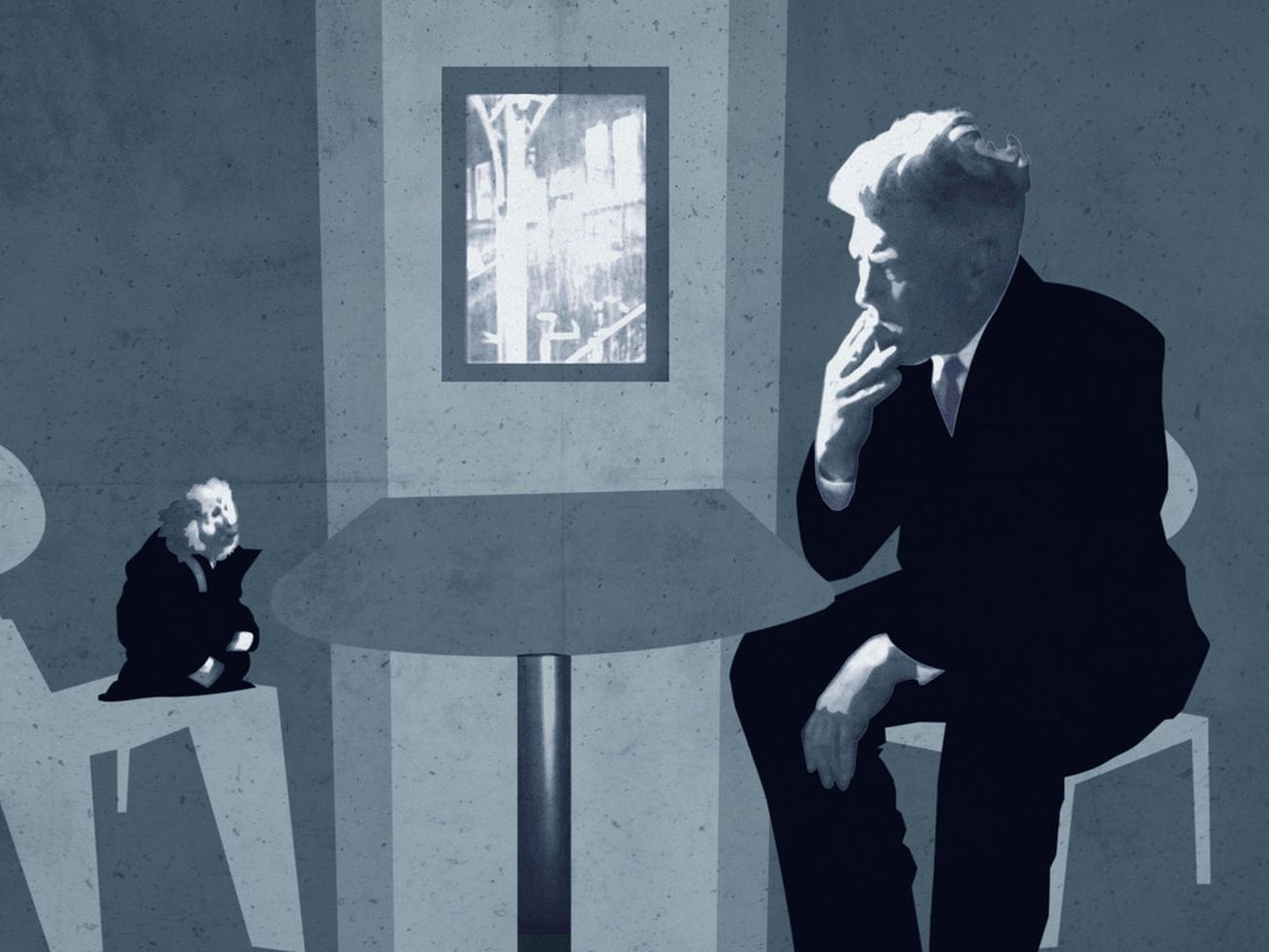 While not created for Netflix, the short could pave the way for more Lynch projects on the streamer

Netflix’s viewing numbers are selectively released and often highly misleading, and detractors argue the company’s rise could threaten the theatrical experience. Despite those persistent (and valid) criticisms, Netflix has managed to do some artistic good. Whether it’s aiding artists otherwise struggling to find a platform for their work, or, in the case of Martin Scorsese’s The Irishman, stepping in when major studios are unwilling to foot the hefty de-aging bill, Netflix has given auteurs resources and creative freedom without having to make major compromises. And for every 6 Underground, Bright, or Bird Box that comes with that arrangement—read: something abominable and virtually unwatchable—something terrific like Roma, the memeable dad blockbuster Triple Frontier, the even more memeable Marriage Story, or a Lonely Island visual album tribute to José Canseco and Mark McGwire comes along and you can’t help but admire the freewheeling artist-streamer relationship.

These examples give fans hope there might be a future for Netflix and David Lynch. The surrealist auteur hasn’t released a feature film since 2006’s Inland Empire, and while Showtime gave Lynch free rein for 2017’s Twin Peaks: The Return, it’s hard to imagine the filmmaker getting a blank check again to make 18 episodes of television, especially without enduring nostalgia for the original series run. (Naturally, Lynch then weaponized Twin Peaks nostalgia against his audience for a discomforting, compelling, and unforgettable small-screen experience.)

Lynch’s oeuvre is an acquired taste, and just as mystifying, irresistible, and beguiling as the rare instances when he allows himself to be interviewed for an extended period of time. But through all-timers like the three seasons of Twin Peaks, Blue Velvet, Mulholland Drive, and The Elephant Man, a lot of us have been converted to the Church of Lynch, which I picture as having slanted floors, screaming patrons, and a bottomless supply of damn fine coffee. (Scrap that, we’re calling it the Black Lodge.) And because Lynch is so enigmatic and famously tight-lipped, we hold our breath with every unsubstantiated rumor surrounding him—whether it’s about a future season of Twin Peaks or the man being spotted at one of Netflix’s offices because, best case, he’s actually going to make another movie.

But while a fourth season of Twin Peaks and a streaming feature film remain entirely hypothetical, the prospects of a professional relationship between Lynch and Netflix now have a little more promise. On Monday, which was also the filmmaker’s 74th birthday, Netflix dropped What Did Jack Do?, a 17-minute short film starring Lynch as a detective interrogating a capuchin monkey suspected of murder. (To which you either respond with “Yep, that checks out” or “LOL what the fuck?” depending on how familiar you are with Lynch’s work.)

What Did Jack Do?, as Lynch-heads might expect, makes for bizarre viewing—the monkey and Lynch exchanging non sequiturs on topics as wide-ranging as chickens, Communism, love, and Santa Claus. (“Well, there is no Santa Claus,” Lynch says, to which the monkey retorts: “I won’t be here for Christmas.” OK!) Yes, the monkey speaks, his maw moving courtesy of a superimposed mouth—the monkey’s voice is likely also provided by Lynch, since the monkey, Jack Cruz, is listed in the credits as “himself.” As Lynch’s detective probes the monkey at a railroad station cafe, we learn Jack could be responsible for a crime of passion, killing someone over his love for a chicken named Toototabon—which sounds like an off-brand Transformer.

It’s weird as hell, man, and I can’t get enough of it. Have you ever wanted to see a monkey tell David Lynch to go burn in hell? Well, spoiler:

A reprieve from this tense and strange interrogation is offered through the appearance of a waitress—played by Lynch’s wife, Emily Stofle—who, naturally, brings the two some coffee. But aside from the waitress’s retro aesthetic, which wouldn’t feel out of place at the Double R Diner, the world feels like it’s out of another time. The only assurance that this is even happening at a railroad cafe are the occasional sounds of unseen trains clattering in the distance. The worlds Lynch constructs are vivid and bewildering: There’s the nagging impression that something awful is hiding in plain sight. Often those fears become realized and it’s fucking terrifying, like the woman (thing?) lurking outside the diner in Mulholland Drive.

What Did Jack Do? is an exercise in Lynch’s trademark style, the sort of hypnotic experience that washes over you and feels like undergoing one of his patented Transcendental Meditation sessions. If you’d told me, after I’d watched it, that the film was 90 minutes instead of 17, I’d have believed you. The grainy black-and-white visuals evoke Lynch’s debut, Eraserhead, while the simplistic setup—most of the short is the entropic exchanges between Jack and Lynch’s detective—has a disarming effect once we reach a climax featuring the monkey spotting his beloved Toototabon and breaking out into song. Just as quickly as I was amused by the monkey’s behavior, I felt my spine tingle when Jack lets out a banshee-like scream upon seeing bae/the fated poultry before an off-screen shoot-out. The short was, for lack of a better word, positively Lynchian.

Lynch has previously indicated he has no plans to make another movie. (He has other creative outlets, like painting and table-making.) Given the uncertain future of Twin Peaks—the third season had a haunting, but satisfying ending, and not to get too macabre, but more actors from the original run pass away each year—fans will no doubt take any new Lynch work they can get, even if it’s a 17-minute tête-à-tête with a monkey in a suit. Monday might’ve been Lynch’s birthday, but What Did Jack Do? was the perfect present for Lynch’s biggest fans, who constantly hope The Return doesn’t mark the filmmaker’s last major work.

What Did Jack Do?, though an engaging and rewatchable short, doesn’t exactly qualify as a “major work” on the same level of Lynch’s most acclaimed projects. But the short could be historic for what it may represent. What Did Jack Do? wasn’t made for Netflix: The film was produced in 2016 (coincidentally, the Chinese Year of the Monkey), premiered at Paris’ Fondation Cartier pour l’art contemporain museum in 2017, and was later screened at Lynch’s own Festival of Disruption in 2018. But the short was never given a home online, so the decision to put the short on Netflix would undoubtedly have required Lynch’s stamp of approval—and if there’s an ulterior motive behind giving What Did Jack Do? a platform on the streamer, its popularity (or lack thereof) could be a litmus test for Netflix mayyyyyyyybe footing the bill for a David Lynch feature. If there is demand, they can offer the surrealist supply.

Too much conjecture? Am I getting a little too Pepe Silvia for my own good? No doubt. I’ll be the first to admit this is a very optimistic reading of What Did Jack Do?, but it’s one I can’t help lean toward. If indie studios won’t fund any more Lynch films, and his small-screen prospects begin and end with the potential of more Twin Peaks, then Netflix might be the ideal place to let the guy cook. Lynch had been hoping to make Antelope Don’t Run No More—an inspired script he wrote featuring talking animals and space aliens—for years, and given the emphasis on TALKING ANIMALS and SPACE ALIENS, this simply needs to happen. Surely the $17 billion the company is reportedly going to spend on original programming this year can spare a bit of dough for David freakin’ Lynch—even if it sheds a few million from Michael Bay’s next fetishistic explosion-fest. Right?

Sadly, I didn’t find What Did Jack Do? on Netflix’s homepage, and the only reason I knew it dropped on Monday was because it gave Film Twitter a collective heart attack. Positive word of mouth is its own type of marketing, but it’s still disheartening to consider whether the streamer is going to bury Lynch’s short in its digital catalog for cinephiles to uncover, the same way Amazon didn’t really give Nicolas Winding Refn’s Too Old to Die Young a fair shake. It may also be hard for Netflix to gauge Lynch-related interest, at least among its American subscribers: The only other project from the auteur’s filmography available in the U.S. is the first two seasons of Twin Peaks.

However, to paraphrase Lloyd Christmas, I’m saying there’s a chance. A chance as unknowing and unpredictable as Netflix’s whims to renew or cancel its shows depending on viewing metrics it doesn’t bother to disclose. We’ll probably never know how many people have watched What Did Jack Do?, and perhaps Netflix has zero interest in partnering with David Lynch outside of housing his festival short, regardless of its buzz on niche corners of the web. But if Netflix is really going to stake its claim as the streamer for all your entertainment needs, that ought to include the surreal and esoteric from a living legend. Disney+ can keep Baby Yoda. I want to support whichever company gives us more from the mind behind Baby Lizard.